and wants to do amazing things
instead of the scared-of-my-own-toothbrush kid she used to be!

Just she and I met up with her Uncle Harry at Lake Pleasant last weekend just to hang out for a few hours.
Uncle Harry and his friends were there to enjoy a long weekend with their kayak club for a big annual event.  She was so sure she'd be bored because she wouldn't know anyone there (her dad and brothers were otherwise occupied at their father/son campout many miles away).

I never dreamed she'd be ready to jump in a kayak the minute we arrived!
No sign of fear WHATSOEVER! 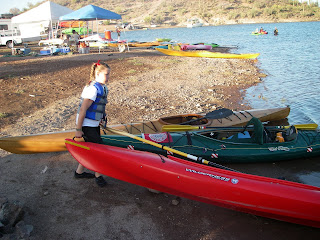 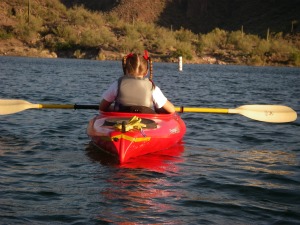 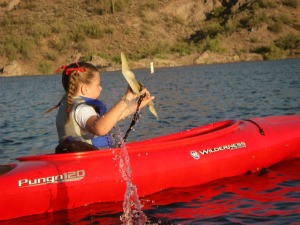 The even bigger surprise was when she was determined to go on
the two-hour group night paddle. 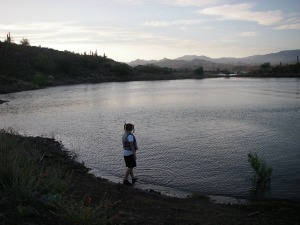 We tried SO hard to dissuade her.
I was sure she'd get out there then start whining that she was tired and didn't want to do it anymore.

Our new friend, Richard, was her guide as he and Uncle Harry quickly
covered her life vest and kayak in blinking light sticks and rushed to catch up with the group. 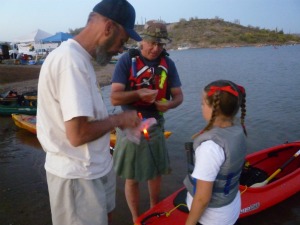 She looked like a Christmas tree as she paddled away into the night. 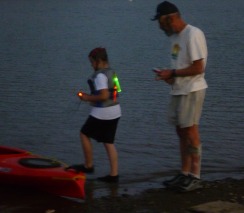 Not only did they quickly catch up with the group,
but they even passed them and were two of the first to arrive back to shore.
IMPRESSIVE!

My baby is growing up!

I was so tired from watching her paddle those 12 miles that I couldn't even drive home.
So we camped along the shore with the many other kayaker's (in the back of our car...lol).

What an awesome unexpected adventure!

Many thanks to her Uncle Harry and our wonderful new friends, Richard & Shea!  Love you guys!!