Fresh Pumpkin Puree Made With Your Microwave!

Thanks to my really good friend Suzi, I've been inspired to cook and freeze my pumpkins instead of pitching them in the trash, like I usually do.

I've cooked them a couple of times before, but it's been many many years
AND
Suzi has a way of doing it that I've never heard of before.
She cooks 'em in the microwave, instead of hassling with a big pot of boiling water.
I hate big pots of boiling water! 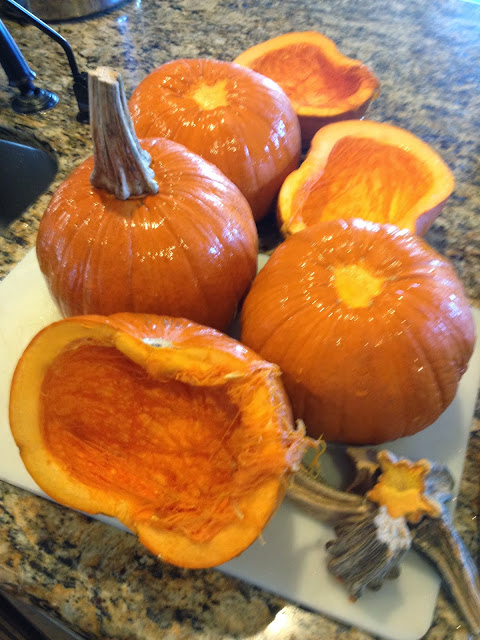 I had 6 of these darling little pumpkins
(that I got for free from my HOA after their pumpkin patch event).

Break the stems off (save the stems for another great project I'll show you later).
Cut the pumpkins in half. 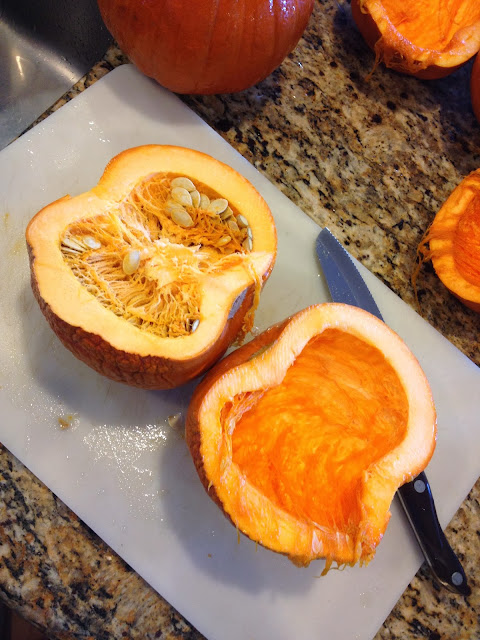 Scoop out and save those beautiful, delicious seeds to roast. 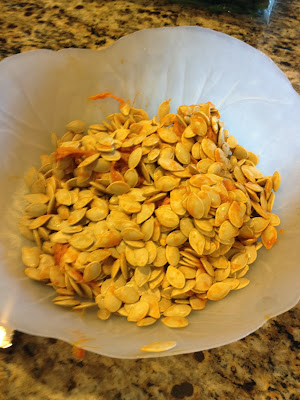 Soak 'em in water.
This will make 'destringing' them much easier later. 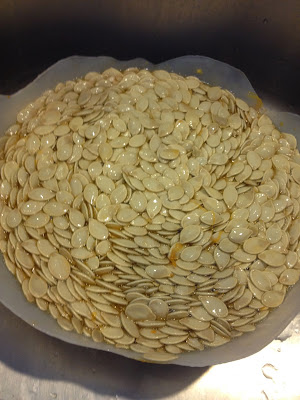 You can't tell, but this bowl is also full of water.
Can you believe how many seeds I was able to get out of those pumpkins?
*happy dance*

Up until now, this is how I've always seen it done. 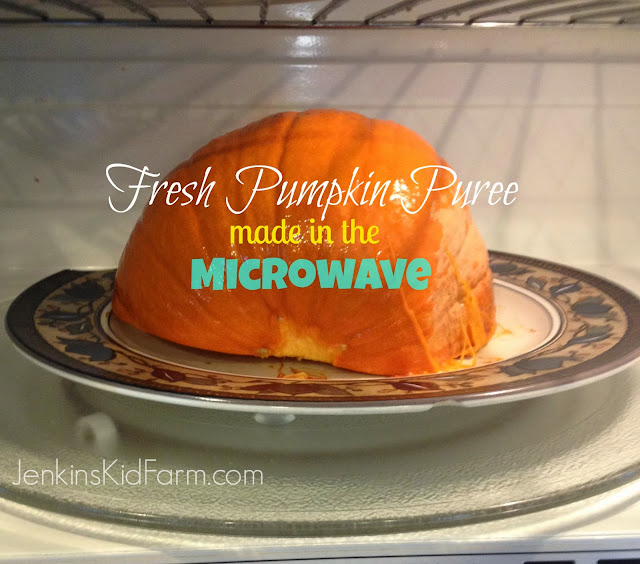 and cook on high.
I cooked this size for about 11 minutes.
If you have larger pumpkins, you may want to cook for 15 or even more.

Yeah, I couldn't believe you could cook anything for that long in the microwave either.

Just imagine the workout my microwave got after cooking SIX HALVES.

I fully expected it to blow up, but nope, it worked great! 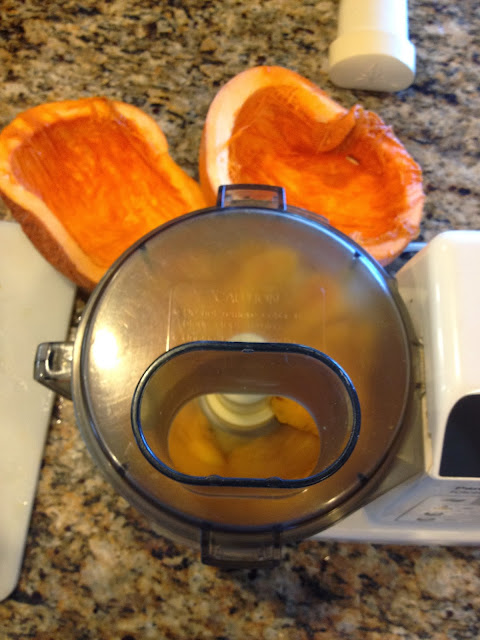 After it has cooled enough to handle
(keep on cooking the next one while you do this)
peel the pumpkin.
I found that for the most part, the skins would just pull right off with my fingers.
You may have to use a paring knife to get off any remainders, and that's okay too. 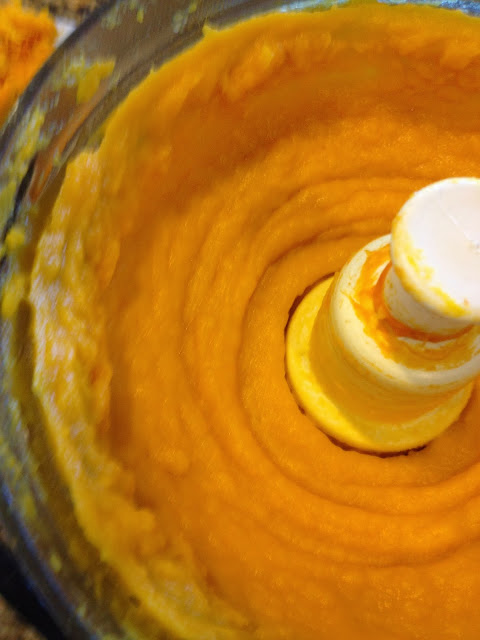 After it's all peeled, throw it in your food processor.
This'll take a while.
Like, go do something else, don't watch it, cuz it'll take 5-10 minutes to blend.
Also, I wouldn't recommend trying to do this with a hand mixer....it just takes TOO long.
Don't add anything, as much as you're tempted to add water.  lol
When it finally looks like baby food......or baby poo, whatever, then it's ready! 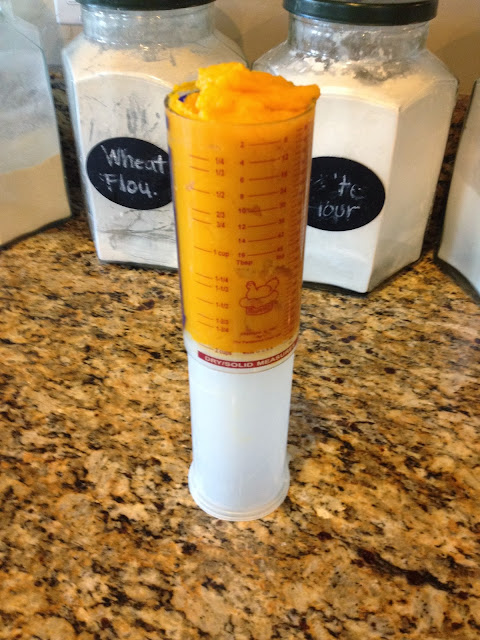 Store in whatever quantity you want, but I chose to put two cups in sandwich bags for freezing.

If you have a measuring cup like this, it'll save you some hassle. 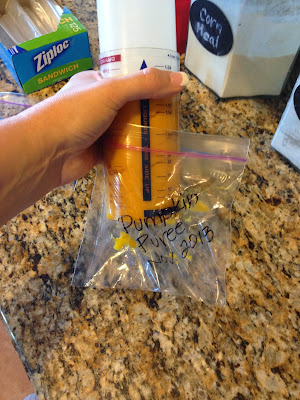 ...cuz you can put it right down into the bag, with a whole lot less mess. 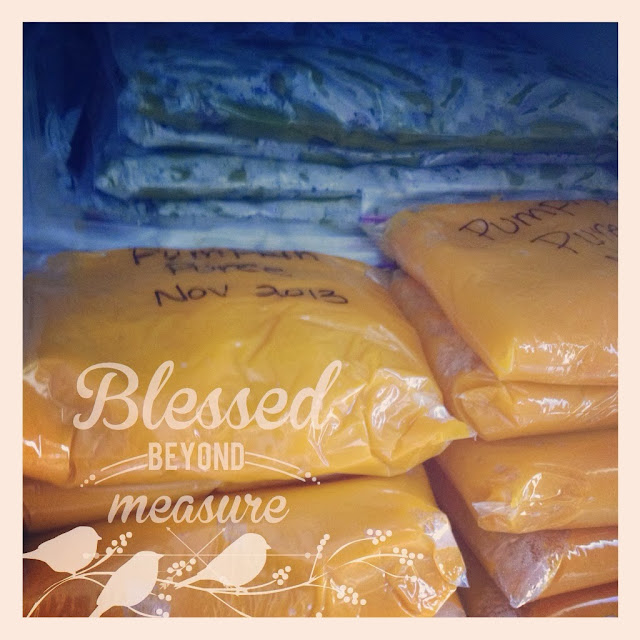 Now my freezer is filled with lots of gorgeous fresh pumpkin, just waiting to be made into pancakes, pies, muffins and cookies!

If you've priced out canned pumpkin puree lately, you'll know this effort is worth it!

....rinse them well in a strainer.  Your water will be bright orange!  Crazy!

Dry them a little out on a paper towel.

When you're ready, spread them in a single layer out on a GREASED cookie sheet.
My favorite pumpkin seasoning is kosher salt (a bit more chunky),
but I thought I'd try something new too.
I added this to one of my sheets of seeds.
It's a shaker of dip mix from Tastefully Simple.
Mmmmm, good stuff!!! 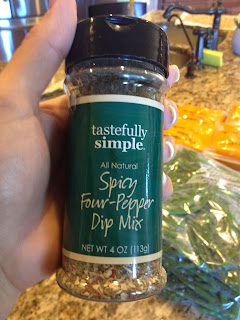 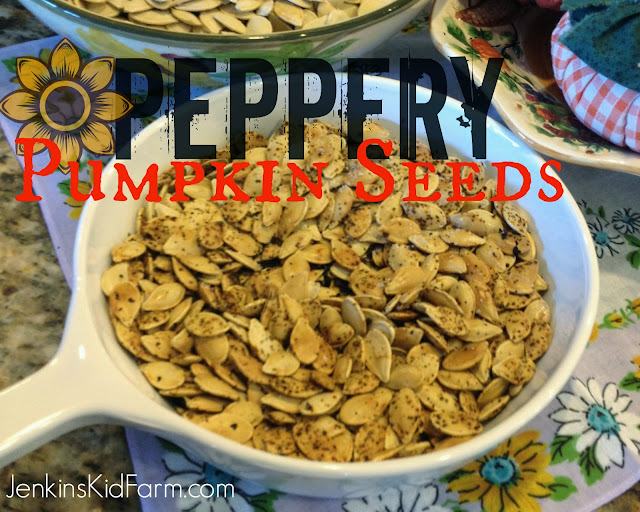 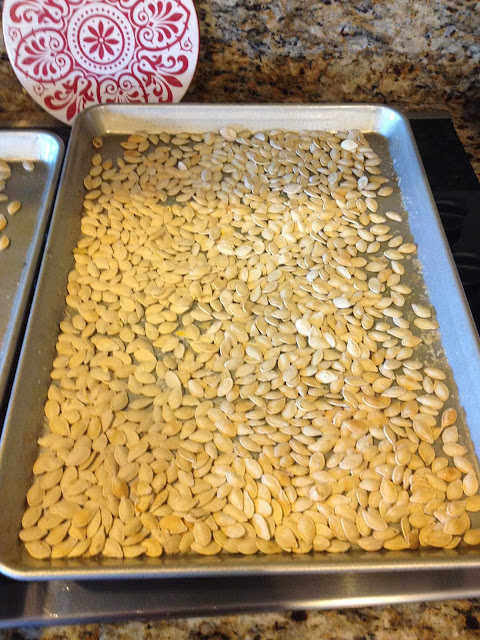 But good 'ol salt is still my favorite!