Chocolate Mousse from an Irishman 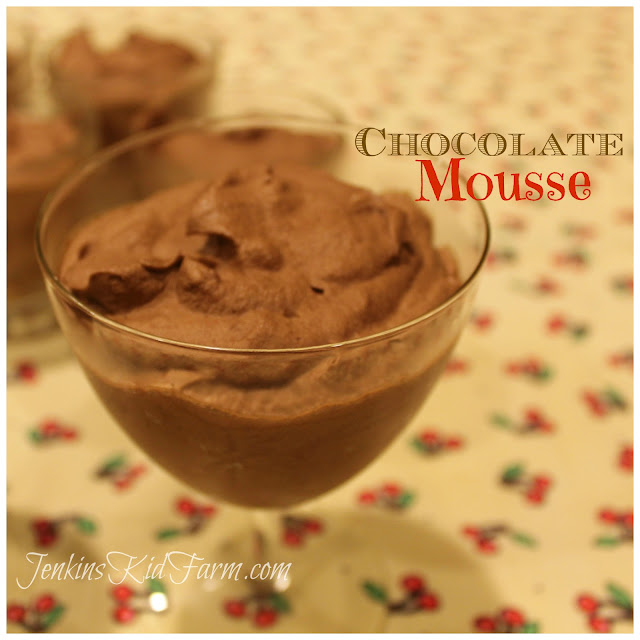 Girls, you know those times when you NEED chocolate, like, BADLY?!
Well I'm hookin' you up with something super chocolaty that will make you smile!
And it's easy!

1.  In double boiler melt chocolate and butter - small pieces at a time.  Refrigerate 30 minutes or until cool.
2.  Add yolks to cooled chocolate - mix with a fork.
3.  In separate bowl, beat egg whites with cream of tartar until peaked.
4.  Add chocolate - beat until silky.
5.  Put in dessert cups - chill for four hours.

I didn't actually make it myself this time, although I did slightly supervise. 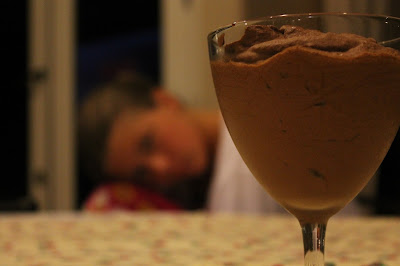 Can you tell who that is? 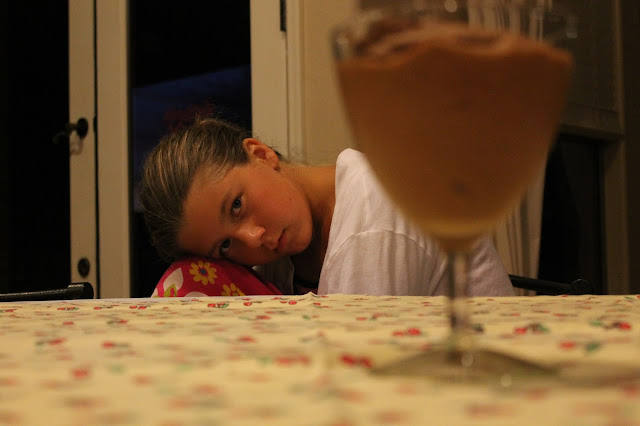 IT'S MADDIE!
My 10-year-old daughter made this deliciousness!

I have kind of a strange and interesting story about where this recipe came from.
Many years ago, before Maddie was even born,
and even before her older brother Regan was born,
wait, it might have even been before their older brother William was born...
we met a man named Robert Brannigan around the mid-90's sometime.

Robert was a clean-cut hitchhiker that my husband picked up along the highway.
He was a sweet older man who was born and raised in Ireland.
In fact, he used to be a professor there years before.
But Robert was faced with a terrible tragedy.
His wife and children were wiped out by the IRA (Irish Republican Army)
and from then on he was a lone wanderer.
How he ended up in Provo, Utah (where we lived at the time)
I'll never know.
But there he was.
My husband brought him home for dinner.

A couple of weeks later my husband saw him hitchhiking again and gave him a ride.
Again, he brought him home.

Robert was homeless, although he would work odd jobs to earn money to earn his keep here and there, mainly the Hotel Roberts (scary place!).
He was always clean and fairly well-dressed.
We offered for Robert to stay with us.
He stayed with us 2 or 3 times, for a few days, maybe a week or two,
then he would just disappear and we wouldn't hear from him for a while, until we'd get a phone call and we'd go pick him up.
It sounds odd, but really, it was just Robert.
We really enjoyed him and liked having him around.
I loved to hear him tell stories in his beautiful Irish lilt!
AND HE COULD COOK!
Man, could he cook!
He'd tell me what to get at the store, then he'd whip up something fabulous!
The man was smart!  He had all of these recipes in his head!
And this chocolate mousse was one of them...

So Robert, wherever you are in this world, know that 20 years later someone still honors you and has kept your recipes close at heart and is now passing them on to the next generation.

Hey, hey.....after writing this I remembered that I had a photo somewhere of Robert.
Lo and behold, here it is from Shelby's scrapbook, along with a poem he wrote for Shelby that I had completely forgotten about.
(see, it pays to scrapbook!)
He adored my kids (these two now in their 20's), I'm sure because they reminded him of his own lost children. 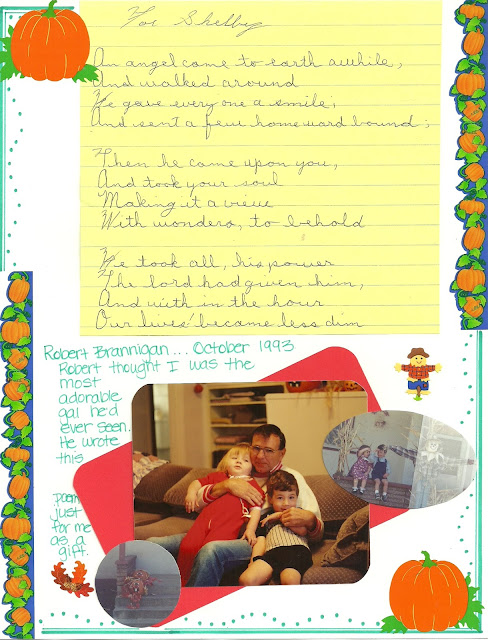 (Robert also gifted to my son John the book "The Phantom Toll Booth", now one of my all-time favorites.  If you haven't read it, you should.  It's a fun read and very smartly written....I love it!)

Thank you, my Irish friend!