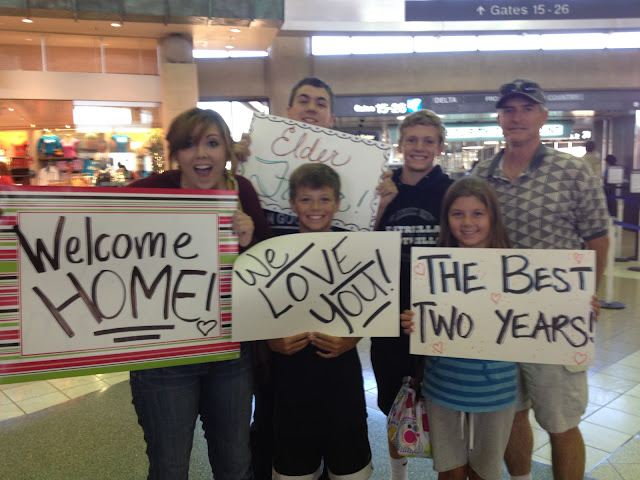 How do I explain how it felt to have my son return home after being gone for two years?

'Trunky' is a common term in our culture.
Homesickness is the distress or impairment caused by an actual or anticipated separation
from the specific home environment or attachment objects.

I've already explained where he was and what he was doing in Postcards From Peru, but the closer it got for him to return, the trunkier I got for him.  I just kept praying that nothing bad would happen to him before I once again saw the whites of his eyes.
It just seemed too good to be true that he was finally coming back!
John isn't the oldest child in our family, but he's the oldest of my children,
so this was a whole new experience for me!

Let me back up to the day before he got home.
It was Election Day.
Our hopes were high and we had great expectations for how the presidential election would turn out.
All day I was super keyed up about the election and for John's return the next day.

About 10:30 pm our dog started barking like crazy and throwing herself at the back door and my office windows {cuz I was in the office}.
It was weird cuz she never barks.
I made Cowboy go out to the backyard with me to investigate.
Nothing.
Back to work and back to watching the news in the office,
but I was still spooked.

Usually I'm an early to bed, early to rise kinda gal,
but I just couldn't even go to bed til midnight!
Cowboy was in bed still watching the news when I got there.
We started talking about the election and how disappointed and irritated we were about it.
While we were chatting, the door/window alarm jingled, like it does every time a door or window is opened, and again when it is closed.
Every once in a while there's a short and it will jingle just to bug me, but usually only when it's windy.

"Honey, did you hear that?  The alarm just went off!"
"Hmmm", then he just keeps on talking about the election.
The alarm goes off again {as though now a door has been shut}.
"Honey, there's someone in the house!!!"
He's totally not concerned about it in the least.
I'm freaking out, convinced someone is in the house.
Someone who shouldn't be!!!
I started thinking maybe I was just being silly because of the dog freaking out earlier,
but I really wanted him to go downstairs to investigate again!
I'm sure in his mind he's thinking, "My wife is losin' it!"

Staring at what would be the ceiling if I could see it.

I honestly was scared.  And I was frozen.

I'm still talking to Cowboy about how freaked out I am.

A little while later I hear someone in Maddie's bathroom.
{our bathrooms are wall-to-wall and I can hear everything in there}.
She never gets up during the night to use her bathroom.

It goes on until I force myself to sleep through my fear.

Next morning I go into Maddie's room early {it's still dark} to get her up for school.

There are two bodies in her bed.

Both bodies are sleeping upside down
{feet at the head of the bed}.

I grab the head of the non-Maddie body and turn the face towards me! 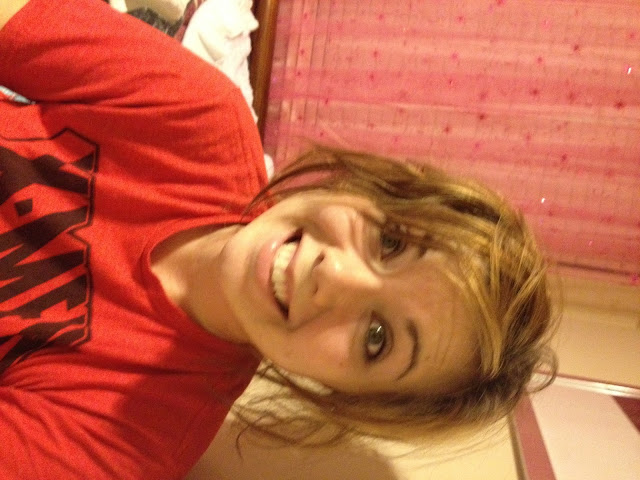 She snuck home SEVEN HUNDRED MILES because she couldn't stand to not be here when her brother arrived from Peru!

I told her I didn't know if I should be more mad or glad.
I was trying to muster some mad, but it just wasn't there at all.

I was super glad to see her!!!
And super glad she wasn't a murderer!!!

Turns out her other brother, Grady, was in the know and had been the one to let her in the house at midnight.
Then they were both creeping slowly and quietly to the top of the stairs,
where they then sat {right outside my bedroom} and listed to every word I said about how freaked out I was.
And.  They.  Were.  Laughing.  Quietly.  But Hysterically.

They were pretty proud of themselves for getting away with such a coup!
(A notable or successful stroke or move)
Although they were nervous that I was going to step outside the door and catch them red-handed!

The whole time Shelby is thinking,
"Why the heck is mom up so late?  She's usually dead by this time of night!"
Ha!

After sending the other kids off to school, Shelby helped me with a bit more homecoming prep.
It was awesome to have her here like old times! 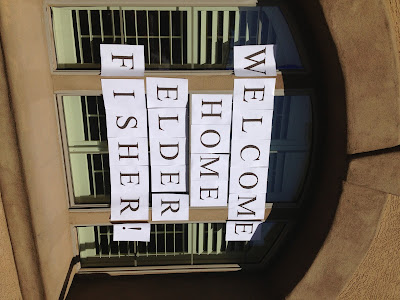 She put this up for me. 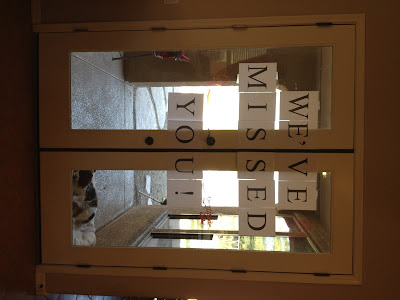 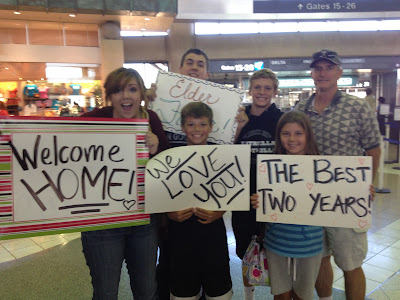 She helped me make these posters.

I checked on the flight status before we went to the aiport.
The flight is going to be an hour and a half late.
I'm going out of my mind.
Pacing around the house looking for stuff to do.

Finally it's time to get the other four kids out of school and head to the airport.
We had to take two cars because there were so many of us and so much expected luggage.

We get to the airport right on time.
Start our anticipation at the gate.
Dude, I'm so nervous and I have to go to the bathroom right now!
The kids are looking at me like "Mooooooooom, you're gonna miss it"!
I go anyway.
After all, it takes forever to deboard a plane, right??????
*fingers crossed*
I run!
I'm back.
I didn't miss a thing!

Is he like the last freaking person to get off this stinkin' plane, for heaven's sake????????

I can swear to the fact that I have never paced like that before in my life.
Pretty sure I never will again.

Wait, I think that's him!  Ohmygosh, it's him!  IT'S HIM!!!
{of course, I start tearing up again}
I'm jumping up and down.
I'm waving.
He's not waving back.
But some short lady is waving back.
That's why John wasn't waving, he thought I was waving at that lady.
Apparently so did she.

Lady, move the heck outta the way!
I'm waving at my SON!!! 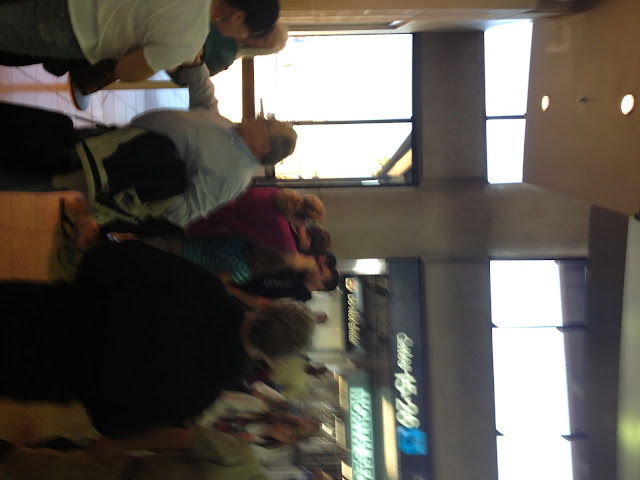 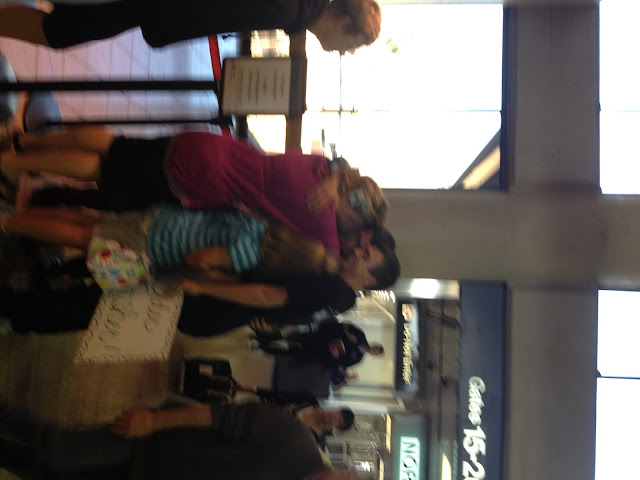 You can't tell, but there are six of us squeezing in there.
{Trace, get on over here!}
{Cowboy, thanks for taking these photos!!!} 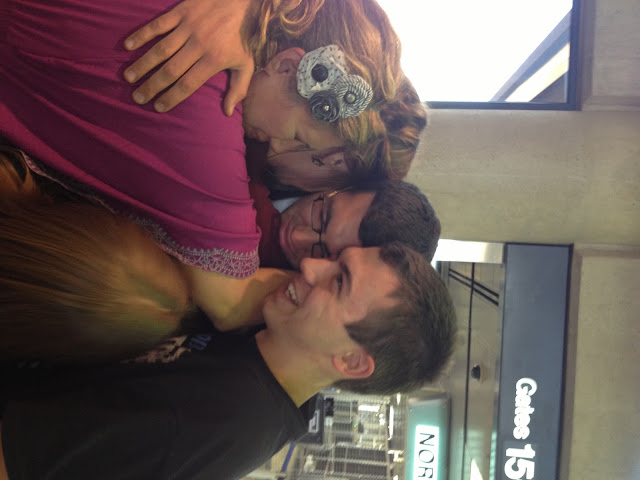 Oh surprise, I'm crying again.
Ohmygosh, this is one of the greatest moments of my entire life!
Folks, that is not an exaggeration.
I really truly loved this moment!!!

{sidenote:  the photo above had more likes on Facebook and Instagram than any photo I've ever posted in either place!  How can you not love a family reunion and a mom crying?  lol} 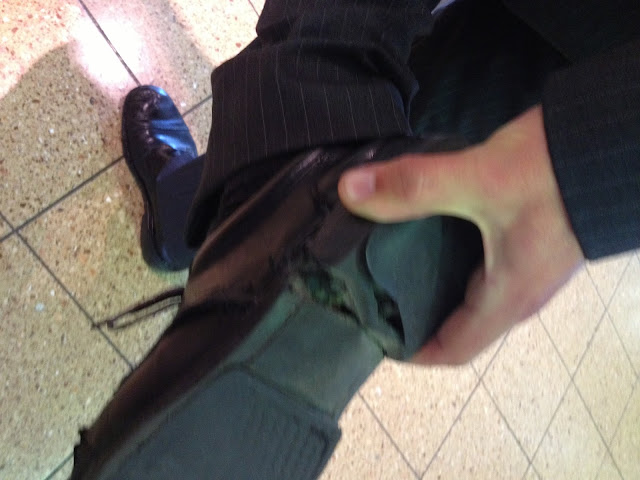 So we talk about his shoes.
Just look at those suckers!
He has literally worn them out in the service of the Lord.
In the past two months he's had them repaired twice
and was still constantly putting new cardboard inside of them to hold them together.
I guess that's what they do in Peru.

Do we even realize how blessed we are here in the U.S.?
If our shoes wear out, we throw them away and go buy two more. 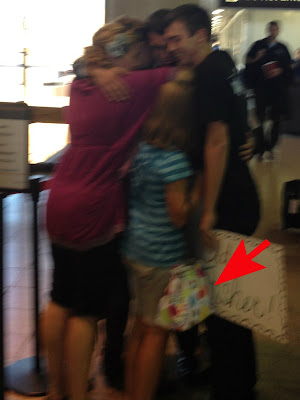 Did you notice earlier Maddie's cute little lunch bag?
We had sumn special in there......on ice! 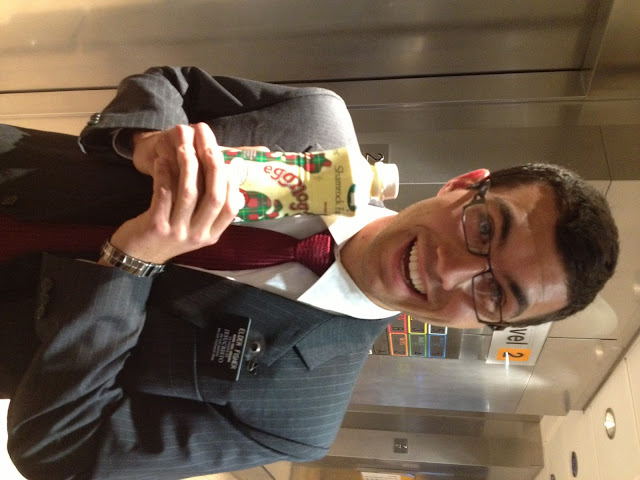 Heeelllllooooooo EGGNOG!!!
His favorite!!!
He hadn't had any in two years!
That's two holiday seasons with NO eggnog.
It was a tragedy, really. 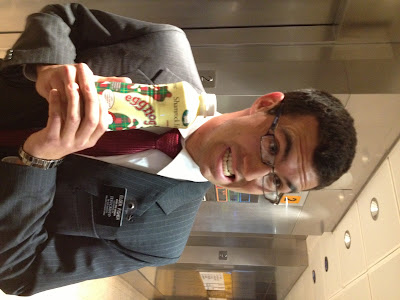 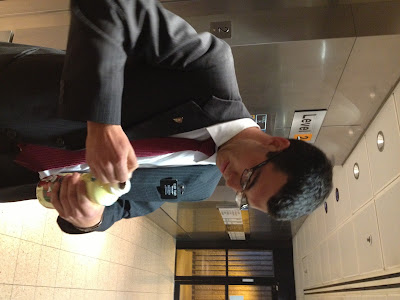 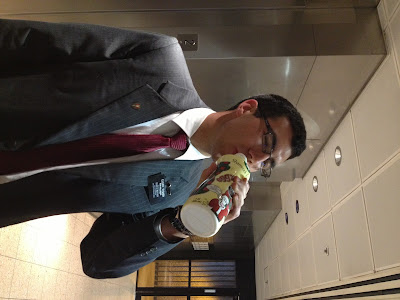 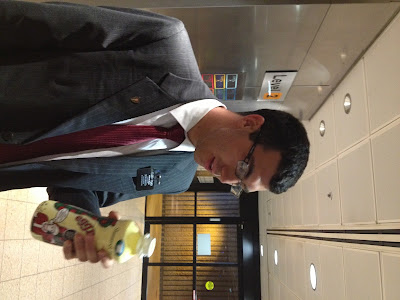 Coming up for air 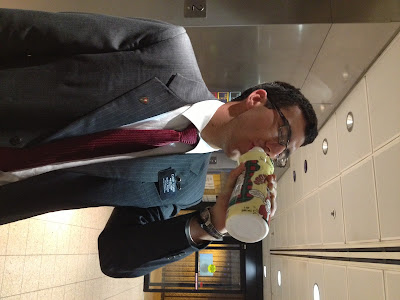 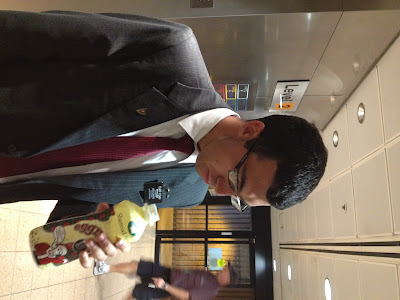 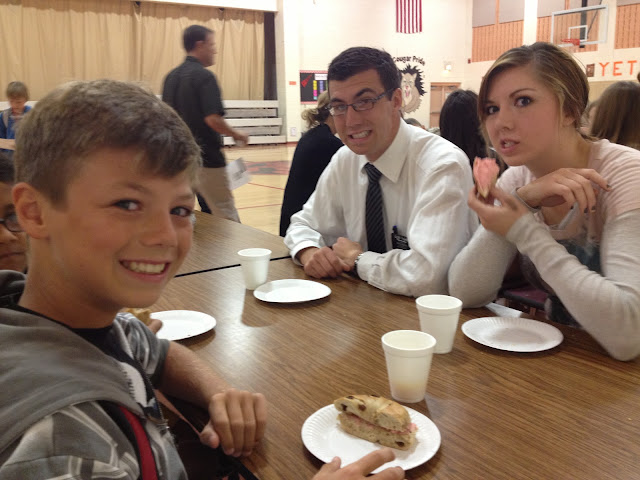 By the next morning we were already dragging him to all our regularly-programmed activities.
Like, Regan's straight-A breakfast.
It was meant for the student and the parents, but like I wasn't going to take John and Shelby with us?
Yeah, right!
P.S.  Congratulations Regan on your Straight-A semester!!! 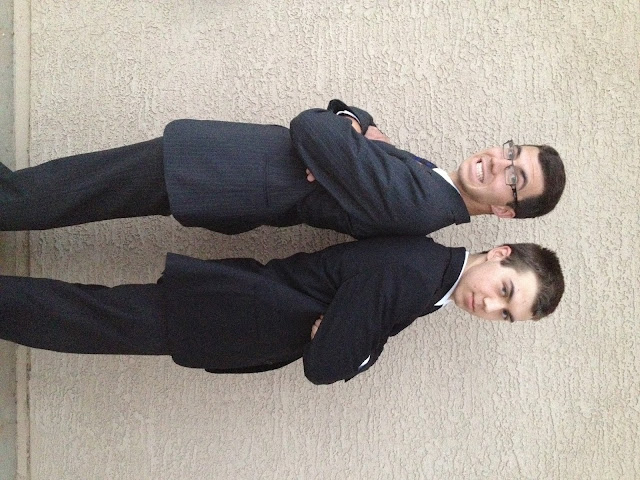 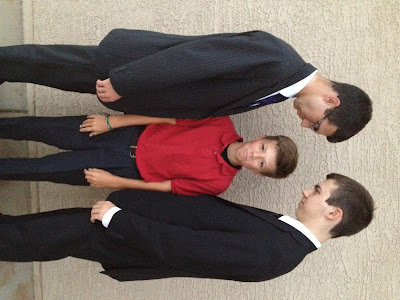 You too Regan, but you've got a ways to go! 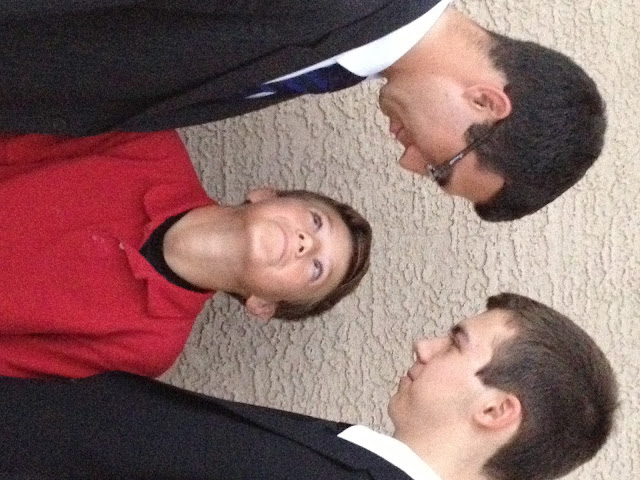 Other events since John has been home
{that I've actually taken pictures of}......... 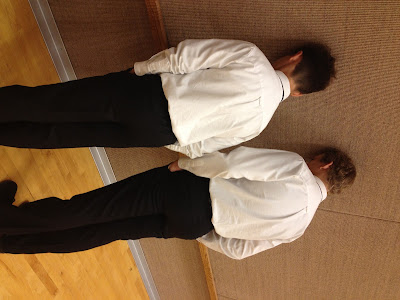 Regan and Trace planking the wall,
a silent message that we were talking to our friends for too long after church on Sunday. 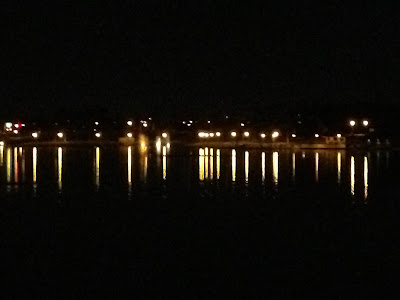 A walk around our beautiful neighborhood lakes. 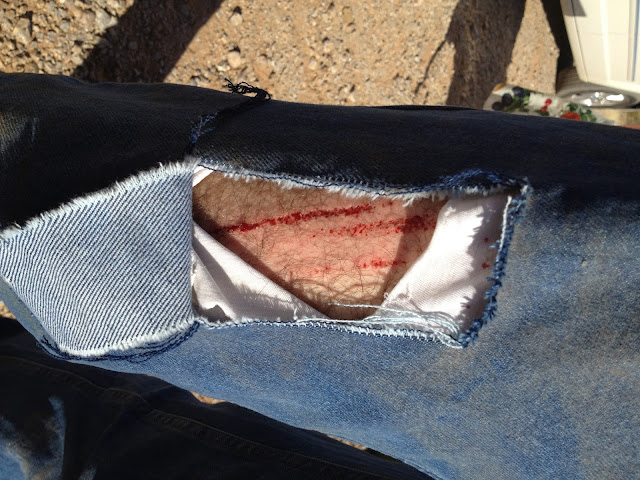 Then some real fun happens at the Veteran's Day desert bbq.
John's first time back on a four-wheeler
{and only the 2nd time he's worn those jeans} 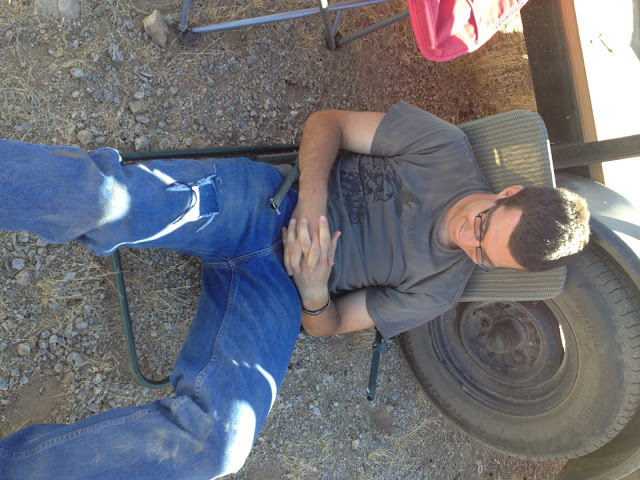 And right after that, his encore is breaking a chair like he's Goldilocks or something! 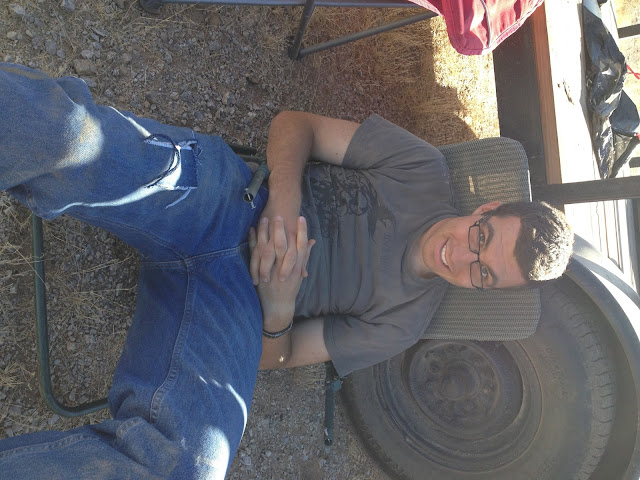 John, I think you were safer in Peru.
{totally hate to say that} 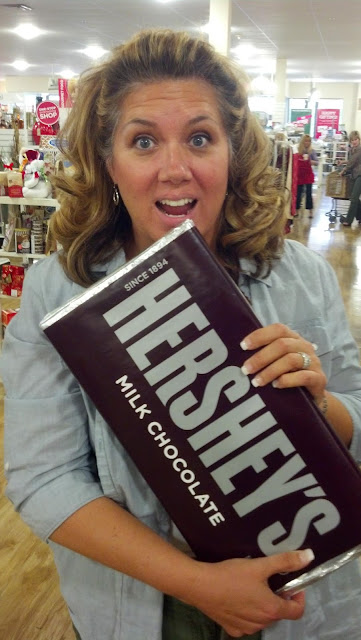 Happiest thing ever to have him home safe and sound!
He'll be hanging around for a while til school starts in January, at which time he'll move to Utah.
In the meantime, HE'S ALREADY FOUND A JOB here in Arizona!
Hot diggity!  In this economy he got hired for the one and only job he applied for that pays great and ends right after the holidays!

I love that the Lord is still blessing my son so immensely!!!

And I feel so blessed, for, gosh, EVERYTHING!
I can't even make a list because absolutely everything would be on it!!!
My family {and chocolate} are right up there at the top!

Happy Thanksgiving week, my friends!
I pray you recognize the many blessings in your life too.
It's a beautiful time to be grateful!!!  :)