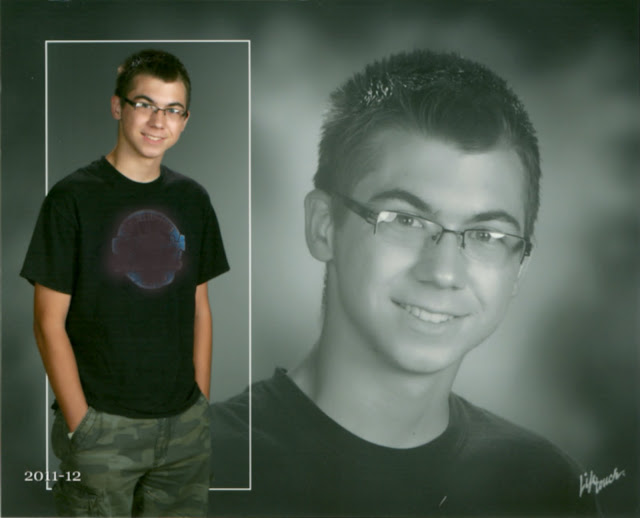 THIRTY-FOUR
IS MY FAVORITE NUMBER TODAY!

Grady is 17 years old.
A Junior in high school.
Decent grades, but not perfect.
He's smart.
A lot of times I don't understand what he's talking about.
For his birthday he wanted a t-shirt that has the periodic tables on it.
I don't know what a periodic table is.
Even after staring at the shirt.
I also got him a physics tie.
He was SUPER happy about it.
I don't know physics either.

I know baker's twine, paper and ink.
Doubling and tripling the recipe is the extent of my math wizziness.

He wasn't interested in reading until about 2 weeks before he started kindergarten.
2 weeks later he could read fluently.....from the scriptures.
Turns out Hop On Pop was a turn-off for him.

In kindergarten he wrote a story about a fountain.
His teacher was impressed that he could spell fountain
and rhyme it with mountain.
In first grade he read the first four Harry Potter books.....by himself.
By second grade his teacher was having to get creative
with his spelling words because the 'normal' list wasn't a challenge.
So she gave him words like
DEOXYRIBONUCLEIC ACID (aka DNA)
I still can't even pronounce that word or remember all of the syllables when I try.
He always got 100% on his spelling tests.

A few years ago, in junior high, he took first place in the regional math challenge...
while he was getting an 'F' in his math class.
I guess he can't be bothered with paperwork.

So what does all of this have to do with the number THIRTY-FOUR?

cuz HE JUST SCORED A THIRTY FOUR ON HIS ACT TEST!!!

That's high enough to qualify for applying to Harvard, Stanford, MIT, Duke, you name it!

Not that we have money to send him to any of those places,

but seriously, I can't stop smiling and being so incredibly proud of this boy!!!

The highest score possible is 36.
The average score is 21.

Oh, by the way, he scored 35 in Science.
34 is just what he scored on everything else.

I noticed on his ACT report that he is interested in
Biochemistry and Biophysics.
I don't really know what those are.

He is not my step-son.
I actually gave birth to Grady.
He is the fruit of MY loins.
I must have a hidden 'smart' gene inside me somewhere,
dormant, hiding, crying to be released.
I'm ignoring it.
What would I do with it anyway?

yes, I'm bragging.
I own the rights to do that.